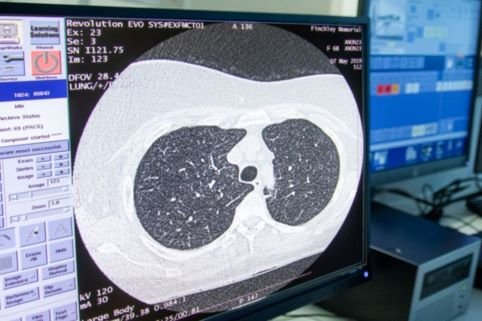 During Lung Cancer Awareness Month (November), the North Central London Cancer Alliance is reminding local residents about changes in health that should be checked by a GP.

“In these times the focus is still on the coronavirus pandemic, but an ongoing cough may be a sign of lung cancer which potentially has much more serious consequences,” says Dr Neal Navani, chair of the North Central and North East London Lung Cancer Expert Reference Group (which plans lung cancer care in the area) and respiratory consultant at University College London Hospitals NHS Foundation Trust (UCLH).

The key points to remember:

One north London resident’s story shows how signs of lung cancer can be spotted.

George, aged 76 from Southgate, had been a smoker since he was 18 but never had any noticeable health problems.  It was only towards the end of 2019 that his wife noticed that he was losing weight and had a slight ongoing cough.

“I put the weight loss down to all the work I was doing on my allotment.” says George.

His wife persuaded him to go with her to see their GP. Following a chat and examination the doctor referred George to have an X-ray straight away. It showed that there was a shadow on his right lung and half an hour later on the same day he had a CT scan.

The CT scan confirmed a cancerous tumour and surgery was booked for the beginning of 2020, arranged by his hospital team at North Middlesex Hospital under respiratory consultant, Zaheer Mangera.

In January 2020, at University College Hospital at Westmoreland Street, the tumour, the upper part of the right lung and surrounding lymph nodes were removed. George spent a short time in intensive care and then spent a week in a recovery ward before returning home.

George’s follow up care took place back at North Middlesex Hospital. The surgery had been successful and a scan showed his lungs were clear of cancer.

However, despite this good news, George had very poor health during 2020 which he and his family had to cope with through the COVID-19 pandemic. He had decided to go ahead with chemotherapy which was recommended as a preventative measure to deal with any possible unseen cancer cells. But he developed sepsis (blood poisoning) which can sometimes occur during the treatment. Then after returning home from a stay in hospital, he had a heart attack.

“I’ve been through a lot but I’m determined to get my quality of life back. I enjoy living and it’s a miracle I’m still around. I don’t expect to be as healthy as I was before my cancer diagnosis but I’m happy, given what I’ve been through. The doctor said ‘it’s over to you’ to get better and gradually I’ve been able to walk around the house and garden more, and I’ve gone back to the allotment.  I rest when I need to, but it’s good to be back outside and spend time with friends.”

“I can’t thank the nurses and doctors enough for all they did for me,” says George.

George remains clear of cancer. He will continue to have check-ups, alongside care for his heart problem.

Since May 2021 the North London Cancer Alliance has been working with local voluntary and community organisations to raise public awareness of signs of cancer so that prompt action can be taken if there are changes in your or a family member’s health. There have been over 70 in-person or virtual events, as well as street and online advertising.

Find out more about the awareness campaign here